Track 6: In Thrall to Ironskull's Heart

Track 6 is an epic story about the Battle of Napue in February 1714, in which the Swedish army suffered a catastrophic defeat against the Russians. The Swedish army consisted of many nationalities, including Swedes, Finns, Germans, Estonians and Latvians, but Finns formed the clear majority. In fact, the Swedish commander General Armfelt referred to his army as the ‘Finnish force’. In addition to professional soldiers, Armfelt recruited peasants from local farms. These new recruits were poorly trained and equipped: most of them wielded spears or only sharpened poles. This scene is the source for the inspiration behind the album cover. 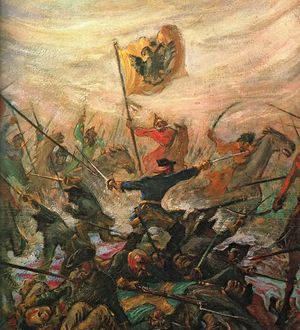 The battle was fought in an open field around the village of Napue in Western Finland. The Finnish force was outnumbered 2:1 by the Russian army. After an initial successful assault, the Finnish force was surrounded by the Russians. Only few escaped or were taken captive: all others were massacred. For the sake of comparison, the bloodiest day for the Finnish army in World War II involved 816 casualties over a frontline that covered 1000 km; at the Battle of Napue, there were 2645 Finnish casualties in an area of four square kilometres. For Finns, it was the reddest day in history.

The narrator in the lyric is a Swedish officer, inspired by the story of Johan Henrik Fieandt. He surrendered at the Battle of Napue and, miraculously, his surrender was accepted while most other soldiers and officers were slaughtered (common practice in those days and by no means something done only by Russians). He was taken to Russia but escaped from the prisoner transport somewhere around the city of Novgorod. He managed to make his way across Finland back to Sweden. Once he got there, he enlisted again with his old commander General Armfelt (picture below) who had escaped from the Battle of Napue. 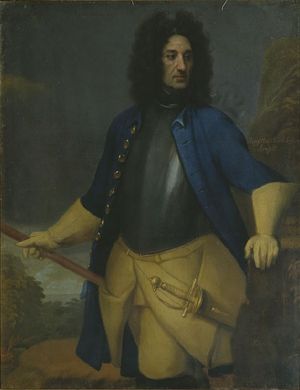 The lyricist Steven Parham describes his inspiration for the lyric:

‘In soldiers’ memoirs, and my own grandfather’s tales of fighting against the Nazis in North Africa, the most striking and consistent feature for me has been the sheer boredom of waiting for battle to begin. With an image of our Angel looming above the battlefield, her face awash in ecstasy at what is about to occur below, I entertained images of how she might react if her main tool – the murderous King Carolus, named Ironskull for his obstinacy – ever felt that he should cease his warmongering. Would she sigh in resignation; or would she push for new convictions? In my thinking, she’d start getting vicious.

The second lyric I wrote for the album, again in Istanbul yet now on the Anatolian side of this continent-dividing metropolis, I found myself wrapped in thoughts of how you lose an empire. Istanbul is two thousand years old: death and war is written into its bones, the doings of its Byzantine and Ottoman rulers, in the end, really rather unheroic as their hearts melted away from self-confidence. Finland, buffer zone of swampy nothingness, was always loot for the two empires that vied for control over its empty spaces; and its relocation from Sweden to Russia was due less to Russian victory than to Swedish incompetence.

Following the disastrous Battle of Napue, the Angel of Carnage was desperately in need of men who, like this track’s protagonist, would remind old Ironskull that his was a divine call to punish the world for its sins.’

Not even the blood-soaked fields at Napue have slaked the Angel of Carnage’s appetites, this mistress not yet fully fed. For our Angel, the fires she has lit within the Swedish Empire are not to be extinguished in the wide spaces of Finland – this is to occur amongst the fells of Norway, as detailed in the album’s final track.