Track 4: You Bitter Source of Sorrow

Track 4 was inspired by the story of Matti Paavonpoika Piipponen, who was persuaded to join the Swedish army when he was 18 years old. He ended up deserting several times and committing crimes, including at least one murder (though the evidence was insufficient for a conviction). While he managed to avoid capital punishment, his fate might have been worse than death: he ended up becoming an army executioner, a loathed profession whose practitioners were social outcasts.

While history does not tell us whether Matti actually executed anyone using the breaking wheel – the most severe punishment in the Swedish penal code at the time – in this lyric Steven took the artistic liberty of assuming he did. The breaking wheel (rådbråkning in Swedish) involved the executioner crushing the convict’s body with a heavy wheel or a smith’s hammer. The executioner was expected to work slowly so that the convict stayed conscious for as long as possible. 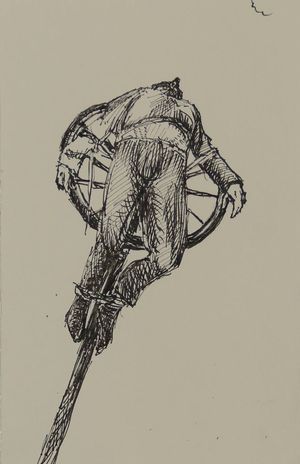 Steven explains the lyric as follows:

‘The social mechanics of war have always been total, in that violence breeds more violence and needs ever more violence to justify itself. A circle of death, or wheel of misfortune for those embroiled in it.

This lyric was the easiest and fastest for me to write. Immediately I heard the machinery of torture in the sparse demo I received from the band, as if the drums and guitar were a mill that ground down all hope for our poor protagonist Matti Piipponen. His dreams of desertion have come to naught, and he is punished in the harshest of all ways for his attempts to escape from the Angel’s clutches: he becomes the man who metes out the King’s justice to criminals within the ranks. A castigator, castigated both physically (by applying the Swedish army’s most horrific instrument of torture, the Breaking Wheel) and emotionally by being the most detested man in camp.

The lyrics here revolve around the dialogue held between Matti, now the King’s torturer, and the instrument that has saved his life yet will destroy his sanity. The Breaking Wheel may well be used to discipline wrong-doers in the most malefic ways, yet its operator is its dearest victim: shredded and sheared, Matti is remoulded into a man unrecognisable to his family back home. Hand-maiden to the King’s righteous wrath, he has been eaten by the Angel of Carnage unleashed upon the land by the King. That which is spit out from the machinery of death can no longer be human. This track is the end of Matti Piipponen’s career in DMB: I buried his sad fate at the bottom of too many shots of Serbian rakija brandy in one of Belgrade’s seediest after-hours dive-bars.

For our man Matti, there is no hope and no redemption, for gleefully the Wheel has turned upon its wielder. None in Carolus’s army were to evade succumbing to the crunching ecstasy of the Angel unleashed by the Swedish king. That, to my mind, is fucking heavy.’

An interesting detail: While the lyric itself is inspired by Matti’s story, the song title is drawn from the case of Henrik Florinus, the vicar of Kemiö, who committed double adultery and contracted the axe murder of a crown bailiff. His adulterous partners lost their heads, but Florinus was sentenced to rådbråkning. At the execution, he sang the psalm ‘O, du bittra sorgekälla’ (O you bitter source of sorrow) before the rådbråkning began. What was left of his body was hung by the side of a road. The flesh disappeared quickly but his bones remained there for years.